This is where Sapporo Holdings' "Frontier Laboratories for Value Creation" and Sapporo Beer's "Research and Development Institute for Alcoholic Beverages" are located. Various research and development projects are being done day by day.

"Hops," the flower of the hop plant, is a plant of the Cannabaceae family. As a vital part of the brewing of the beer, it is one of the themes that have been studied by Sapporo's institutes for many years.

Furthermore, it has become clear that the "hop water extract" extracted from hops water has a surprising effect according to the long-time research done by the Sapporo Group. 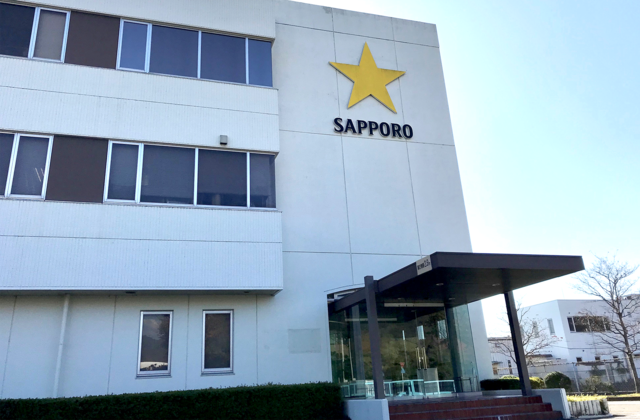 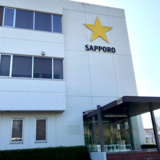 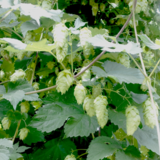 Many people have trouble with allergic diseases such as hay fever and bronchial asthma.

It reacts with allergens (pollen, proteins derived from mites), which is the causative substance of allergy, and releases substances such as "histamine", causing inflammation in the surroundings.

The "hop water extract" has an effect of suppressing release of this "histamine", and it can be expected to soothe hay fever, bronchial asthma and food allergy. 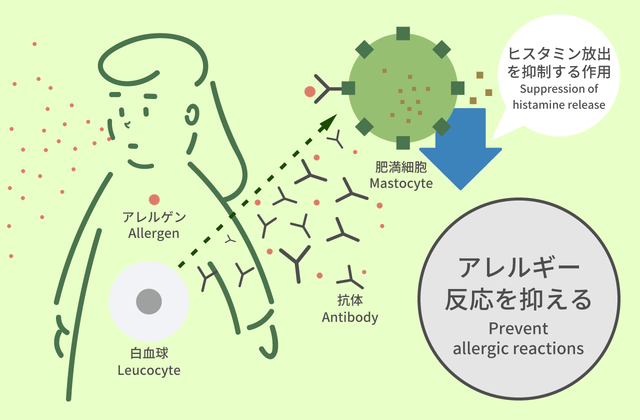 Outrageous influenza that threatens to rage across the country every year is infected by influenza virus adsorbing to our body cells. 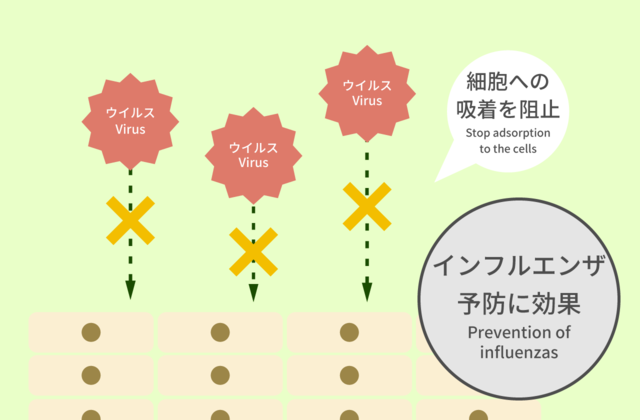 Furthermore, "hop water extract" has been found to have the effect of washing away oil in the mouth.

It is a perfect effect to respond to the needs of people thinking that "I want to taste the next bite after clearing the inside of the mouth" after a greasy meal!

Obesity occurs when adipocytes differentiate, then become hypertrophic, and then proliferate.

The fact that "hop water extract" extracted from the hops water has suppression effect on adipocyte differentiation is greatly accepted. 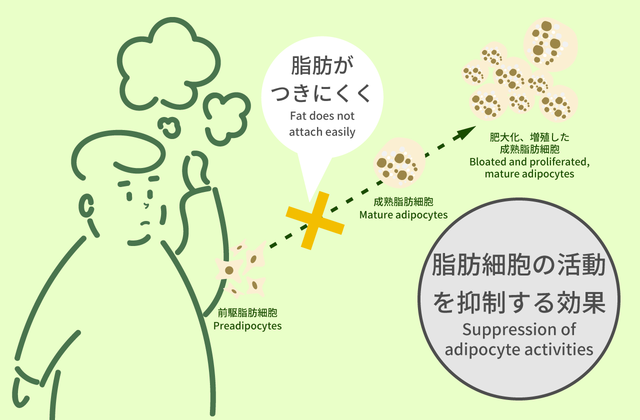 What's Even Better, the Safe Ingredient Derived from Plant

There are many medicines with the functions listed above, but they are mainly used as "treatments" for very serious symptoms.

As for the "hop water extract" which is our offering technology of this time, it is a raw material derived from natural origin, so it is possible to develop into various daily goods categories such as drinks, supplements, foods and other miscellaneous goods. For example, "a new functional product that exerts its effect by continuous taking" might be a great idea!

Everyone in the Sapporo Group is also very looking forward to your creative ideas that will be posted.

This time, using this "hop water extract", from "product concept" of "what kind of customers", what kind of needs  to "how to satisfy",  and "product design" such as shape, color and package, etc. We are looking for a wide range of product planning proposals! 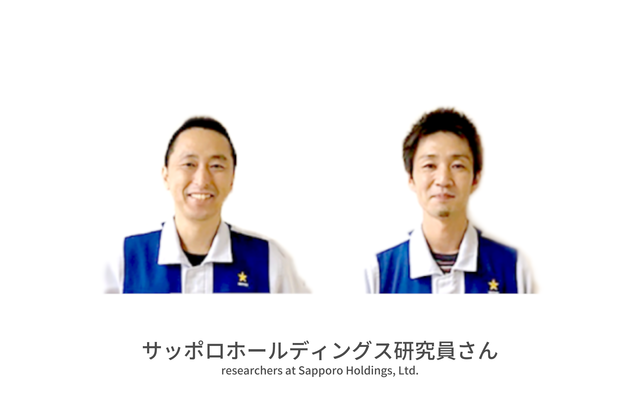 About the Call for Entry

*If the design work is difficult, suggestions of a "product concept" are also acceptable.

Application deadline for product concept / design is 【May 7, 2019, Tuesday】. After that, we will inform you of the selection result by the end of June.

※We ask for your understanding that although we believe all cocepts are very good ones, you might be asked to brush up your design when a little improvement is needed.

We are waiting for your participation from the bottom of our heart!

Questions received from the attendants at the briefing session held on March 4 have been answered by Sapporo Holdings as below. Please definitely take these into consideration with your design!

Q1:Is it better to design something that's for human to use?

A:Because it is a stage of possibility, it is not necessary to narrow down your ideas.

Q2:Do you decide on the category of commercialization by whether the design is easy to produce or not? How do you think about the segmentation of the target customers?

A:The business domain of Sapporo Holdings Ltd. now contains "alcohol, food, and drink", of course if you construct your design within the domain, the commercialization might be easier. However, this time we would like to collect various interesting ideas from designers instead of narrowing down to that. There are no restrictions such as BtoB and toC.

Q3:Although it is said that it has an effect of suppressing allergic reactions, is it also compatible with house dust and children's allergies in addition to pollen?

A:The effects on allergic reactions besides pollen have not been confirmed yet.

Q4:Can you feel a refreshing feeling on your skin, for example by applying hop to lotion for symptoms such as itching of the skin by pollen, itching eyes, etc?

A:The effect when applied to the skin is not confirmed.

Q6:Is it possible to combine hop with patents such as lactobacillus that Sapporo possesses?

A:Although it is possible to combine the 2 technologies for product development, but this may not be easy to propose in our organization.

Q7:Is it possible to specify a certain flavor of it?

A:It is possible to change the taste by adding a flavor.

Q8:After extraction, at which temperature will it be effective?

Q9:Does the efficacy disappear as the temperature at extraction rises?

A:As for the effect on allergy, it has been confirmed that the effect decreases as the extraction temperature rises.

Q10:After extraction, does it become useless if not combined with water? For example, milk?

A:The effect of those extracted with solvents other than water has not been confirmed. However, it is possible to mix water extract with milk, etc.

Q11:How much to consume / does it cost to soothe the hay fever symptoms?

A:In terms of cost, please think that it can be commercialized as drinking waters. In addition, we confirmed that we relieved symptom of hay fever, but did not confirm about complete cure.

Q12:Will the effect change depending on the type of hop?

A:The effect varies depending on the type of hop.
There are two types of hop water extract, liquid and powder.

Q13:How is the firing method done? Is the extracted material liquid?

A:Powdering is performed by spray drying, but there is no particular specification on the method of powdering.

Q14:For development, do you recommend to use in beverages or as powders? Powders are better?

Q15:What is the taste of hop water extract?

A:The composition of the taste is mainly bitter and the aroma has a citrus aroma.

Sapporo and TRINUS will jointly commercialize and sell the product and pay the following fee.

The terms and conditions of this agreement are detailed in this document: trinus.jp

Cookies are small data files sent from a website and stored on the user’s computer, tablet or mobile phone. Cookies do not contain malware, viruses or other harmful programs.

Cookies are necessary for websites to function. The usage of cookies allows websites to check your history, and use this information to tailor the contents of the website to meet your needs and interests. For example, cookies store information such as what items have been added to the shopping basket, whether the you have visited the website in the past, whether you are logged in, what language and currency you wish to be displayed. Cookies are also used to target the adverts you see on our website to things you might be interested in. To put it simply, cookies are used to tailor what you see on the website to be relevant to you.

You can disable cookies on your computer, tablet or mobile phone at any time by going into your browser settings. The way you access the cookie settings will be different depending on the web browser you use. Note that disabling cookies from a website may preventing you from using certain features which require your preferences to be recorded.

This browser addon allows you to prevent your data being used by Google Analytics.

It is possible to delete cookies that you have approved in the past. If you are using the latest version of any internet browser, you can use the following keyboard shortcut to go to your cookie settings: Ctrl + Shift + Delete If the keyboard short cut does not work or if you are using an Apple Mac, please check what browser you are using and click on the appropriate link from the options presented below:

Note: If you use several internet browsers, it will be necessary for you to delete the cookies from each of your browsers.

Do you have any other questions?

If you have any questions on the above information or on how your personal data is processed, please do not hesitate to contact us at info@trinus.jp